{A small shop with a BIG inventory}

Our friendly and knowledgeable staff has a combined experience of over 200 years combined in knitting, crochet, spinning, weaving & more.

Latisha is a married, mother of 8, girl scout leader, is involved with many charitable projcets/groups and advocate for (her) children.  She learned to crochet in the 4th grade and taught herself (mostly) to knit over 25 years ago, after discovering Sheep’s Clothing in a little office building on the corner of Wright and Van Gisen in Richland. Tish even learned to knit socks from our own Judie Wise!  She is a knitwear and crochet designer, professional seamstress, award winning costumer and owner of Knotted Fibers, under which she has made and sold various handmade products. 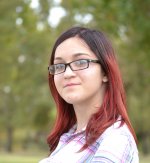 Abi has been knitting, crocheting and loom knitting since she was 5. As a girl scout, her interest started with earning badges and learning what kinds of stuff Mommy did, at the same time. She’s is very accomplished and has made exquisite shawls very quickly. She has been the VP of the Hanford HS Knitting & Crochet Club. She’s taught many younger, and older than herself. Abi is called on often for her unique experience in being a left handed crafter. She personally knows the hardships that come from being a lefty in a right-handed pattern written world. Abi has entered her projects in the adult show classes and has walked away with all blue ribbons. Her spinning has improved over the last few months, earning her a highest award for her most recently spun skein.

Liz started Hanford High School’s Knitting Club and then turned it into the Knitting & Crochet Club. She’s been knitting for many years, just picked up crochet and spinning. Liz is a magnet for kids and especially those with special needs. She has patiently spent many hours teaching people from the young with autism to the older than her mother, who are teachers themselves, to knit and loom knit. Cooking is Liz’s first love though and she should be off to culinary school next year. She has so many WIPs & UFOs that even we can’t keep up. She’s picked up advanced techniques such as entrelac and brioche with ease. Honesty is one of her virtues that can be taken as abrasive, but she’s got a heart of gold and will say it’s wrong, if it’s wrong.

Charities & Other Organization Who We Support or Are Involved With:

The Knitting Guild of America

The Crochet Guild of America